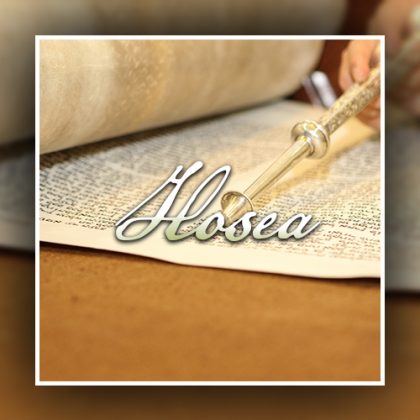 It is hard to imagine how difficult life must have been for Hosea. Having followed the leading of God to marry Gomer, Hosea found that she was living such a wicked life that she had literally sold herself into slavery as a prostitute. After the difficult time of bringing Gomer back home (chapters 1-3), Hosea was sent to preach to the Northern Kingdom (the ten tribes called Israel or Ephraim). His message was for them to repent or they would be taken captive. The people turned their backs on his preaching and continued in their sin. The period of Hosea’s ministry lasted about fifty years.

When studying the second or prophetic section, look for three themes: 1. the sins of the people, 2. the certainty of judgment, and 3. God’s love for Israel. Notice the following sins in Hosea:

1. 4:2, 6:9, violent crimes were committed so frequently that the phrase “blood toucheth blood” is used.

2. 7:3-7, God was to be in control of who was on the throne in Israel (theocracy) but political intrigue ran rampant one assassination after another. Notice verse 7b says, speaking of the ungodly men on the throne, “…there is none among them that calleth unto me.”

3. 7:11; 8:9, as a theocracy, Israel was not to make any alliances with foreign powers. The “foreign intrigue” ran from Assyria to Egypt and back again. They would not trust God for safety but trusted alliances with heathen nations.

4. 7:15, the sin of ingratitude can be seen when God had blessed Israel, they would not recognize His provision in victory. One can almost sense the pain God must have felt in all this when He states in verse fifteen, “Though I have bound and strengthened their arms, yet do they imagine mischief against me.” (see also, Ps. 18:34, 144:1).

5. 12:7, habitual social sins prevailed. Verse seven declares “He is a merchant, the balances of deceit are in his hand: he loveth to oppress.” There was no social conscience!

6. 13:6 reveals the selfishness and arrogance especially in leadership both in the priesthood and royalty, “According to their pasture, so were they filled; they were filled, and their heart was exalted; therefore have they forgotten me.”

When applying these lessons to our lives, let us be thankful for God’s working in our lives (Ps. 37:23) and surrender to His leadership. The way of sin is hard and will bring judgment. But, God loves His children!